Hodrin Felhammer looked out over the plain. The wind blew great clouds of ash into the sky, making it near impossible to see. There below the hill they now crested he could just about make out the ruins of some long dead settlement, what walls remained turned grey from an age of weathering this harsh environment. This ruin, nestled in the foothills of the Ashen Stair, was like any other that dotted the region save for the ancient tower that stood looming at its edge. It is said this tower is what brought the town to its end. Felhammer didn't doubt it. It was a ghastly thing that although abandoned constantly emanated dark energy and as such screamed out as a beacon to all sorts of foul beast that roamed the land. Such beasts now awaited them, lurking within the pale copse that stood at the foot of the tower. He could smell them and they knew it.
Felhammer looked to his brothers, small in number as they were, each one was capable of holding their own against such filth and more. They had been tested. More than tested. Who were these foul things to stop them from returning to mighty Sigmaron. Who were these. With a snarl he slammed his hammer against the edge of his shield. The Sigmarite sent out a loud note across the gap between hill and copse, which rang out for several moments before silence once again descended on the scene. As he turned to his men a monstrous braying sounded from amid the trees, answered moments later by several larger roars to the east of the tower itself. It chose that moment to start raining. "Let us begin".

As one the Liberators moved forward, coming to a stop in perfect formation at Felhammers right. They slammed their hammers against the edge of their shields once, as he had done and again the sound echoed out to meet the creatures that opposed them. The Liberators were like black mountains, their silhouettes unwavering and their power absolute. They wore the abyss about them and their shoulders heaved, not with exertion but with white hot fury. The heavy furs they wore across their pauldrons rustled like great manes and the bones that hung on their armour chattered and clicked in the wind. They were as death cometh. Sigmars death.
Behind them upon the hill stood the Judicators, each similar to the Liberators but for the cloaks they wore and the cowls that hid their faces in place of the Liberators death masks. They carried heavy skybolt bows and boltstorm crossbows which they now readied.. Each loosed arrow and bolt guaranteed oblivion to the Beastmen that blocked their path. For Beastmen they were.
The shapes stalked out from between the trees, anthropomorphic creatures wrapped in rags and wielding huge wicked blades. They carried a large ugly banner marked with the symbol of the god of pestilence and decay, Nurgal. The bearer of this banner drove it into the ground before emitting a bray that was carried by those around him. They slammed their weapons into the nearby trees and earth. Butting heads and thumping fists into chests. They're blood was up and retreat was not an option.
Felhammer observed a slightly smaller creature to their left, clad in pale robes and wielding what appeared to be a staff covered in bones. He deduced that this must be their leader or shaman. He was certain of this when after a moment of waving its staff the air around the creature took on a ghastly hue which seemed to envelope the pestilent Beastmen under its command. The Beastmen surged forward.

"Shields!" roared Felhammer, as with inhuman speed the Foe reached the Liberators line. The Liberators had just enough time to raise their shield-wall before the frenzied Beastmen crashed upon them. Hacking and slicing at the warriors, they managed to bring one brother down before in turn losing two of their foul number to the swings of hammers. "Only the Faithful!", roared Felhammer as he smashed his shield into a beasts muzzle, sending him falling backwards and leaving just enough of an opening to bring his hammer down and crush the creatures skull. "Only the Faithful", answered his brothers-in-arms. Another Liberator fell beneath the blades of the frenzied Beastmen, several more creatures dying in return. This fight was taking a dark turn. These creatures were not as they first seemed.
The fighting churned on and on, Felhammer and his brothers blocking and striking, blocking and striking. For every Beastmen they killed however, three more would stand in its place. Suddenly, a horn blast emitted from behind the beastmen and they doubled their already substantial ferocity. Felhammer swung about him with his hammer, knocking Beastmen sprawling and spraying sharpened teeth, broken bones and foul blood in every direction. The rain continued to come down and the ground became a quagmire of blood and wet ash. Before he realised it he stood alone. Beastmen lay dead and dying all around him, as did his brothers. His Liberators had been slain, brothers he had fought with for his entire reforged existance, dead. He could barely believe such a thing. Across the now churned earth he saw the Shaman step out of the forest, it rattled its staff again and a chariot pulled by strange horned quadruped creatures came roaring towards him. Felhammer turned to order his Judicator brethren to fire when an enormous force hit him square in the back and sent him several metres backwards. His entire body screamed in agony before he finally hit the ground and blacked out.

Between dreams of sweet oblivion and golden sunrises Felhammer caught glimpses of the continued battle that followed. His Judicators firing at the oncoming chariot. A trio of enormous Bullheaded creatures emerging from the shadows of the ruin. The swooping charge of the Prosecutors, like angels of vengeance made manifest. Yet more brothers fallen to the foulness of chaos blades. Broken wings and shattered bows. The braying face of that accursed Shaman and finally, once again, oblivion.

If you've made it this far, I hope you enjoyed my little narrative battle report for my first ever game of Age of Sigmar. I will be writing more and they will be tying into the setting of the Ashen Stair. This is not the last you've seen of Hodrin Felhammer and his brethren. Until next time, beware Old Night and safe travels.

Posted by Paint, Pencils & Plastics at 02:29 9 comments: Links to this post

Suffer not the distraction to live! - Deathwatch Overkill 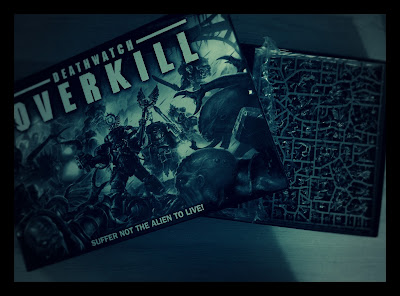 Firstly. I am not going to be doing anything with this boxset until I've continued with my current projects and I get at least my INQ28 miniatures painted and my Ashen Stair project under way. I have promised myself this and by the HIVE MIND IT SHALL HAPPEN!! *cough*

Now. It's a wonderful boxset, with some of the most amazing plastics I've ever seen GW produce. The Genestealer Cultists models will be used for the board game, my INQ28 games, my Genestealer Cult 'Munda gang and for my 40k Tyranids. So much value for money! I will also be holding on to the Space Marines as I have never painted a Marine and it will prove a nice exercise.

I can see a lot of conversion potential with both sets of plastics. The Genestealer lending themselves nicely to some Voiddweller concepts due to the ribbed design of their outfits and the Abberants could be used to convert either heavy Twists or scalies with very little effort, to name but two possibilities.

The Deathwatch themselves are a nice easy kit that I'm sure plenty of players are going to cut apart and use for truescaling or to add a bit of character to their existing armies. I'll be keeping them whole methinks. In fact, I'll be keeping the entire boxset whole. Conversions will only happen should I manage to find the Genestealer half of the box on the cheap somewhere.

I will also be using the board sections provided in upcoming INQ28 games as it is highly detailed and nicely produced.

One last thing. I did get a nice text free print of the box art for preordering. It will be finding a frame above my hobby desk soon as I am a big fan of Raymond Swanland.

Until next time folks, enjoy and beware of Old Night.

Posted by Paint, Pencils & Plastics at 15:41 No comments: Links to this post

Welcome Traveller, to Paints, Pencils and Plastics!
Under the sinister gaze of Morrslieb, stay a while and browse my various projects, but beware Old Night and all her Terrors.
I hope you Enjoy!